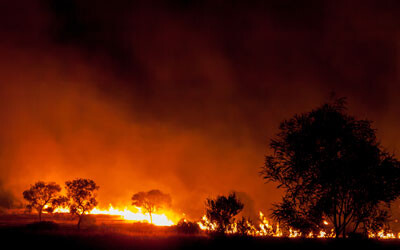 The NSW Bushfire Inquiry has made a range of recommendations for strengthening the state’s emergency communications capabilities.

The final report of the NSW Bushfire Inquiry has been released, and it makes numerous recommendations for improving the fighting of bushfires and boosting the technology and resources available to firefighters and emergency management authorities. Many of those recommendations concern communications.

To start with, the Inquiry found that there are several problems with New South Wales’ Public Safety Network (PSN) — formerly known as the Government Radio Network — including the well-known issues of coverage, forcing agencies to rely upon PMR networks that cannot provide broadband data services.

The report also states that “despite work to provide connectivity between the PSN and the Queensland Government Wireless Network, there is no multi-state interoperability for wide area communications, and NSW radio must be physically fitted to interstate metropolitan fire fighting vehicles when they arrive in NSW”.

The Inquiry was told that there were PSN coverage issues on the NSW North Coast “as interim ‘fixes’ were put in place” and that the network “was partially activated and agencies had to largely rely on their individual PMR networks”.

“A lack of deployable equipment and the vast and mountainous geography of the areas involved meant it was not always possible to establish effective communications networks. This meant that fire agencies deployed communication specialists to use deployable radio repeater equipment to attempt to create ‘on the run’ interoperability networks to allow for tactical communications between agencies,” the report said.

Thus, Recommendation 55 states that the NSW Government should ensure that “all NSW fire authority personnel and vehicles can access and utilise the Public Safety Network (PSN). This should include access to NSW RFS Private Mobile Radio networks where PSN coverage is not yet available.” It also says that the NSW Telco Authority should “review cross-border communications availability and planning and advise NSW fire authorities on next steps to enable multi-state interoperability for wide area communications”.

Furthermore, the State Emergency Operations Centre (SEOC) does not have its own independent PSN capability due to a lack of hardware and no assigned talk groups or service subscriptions. Recommendation 56 states that the government should provide the SEOC with independent PSN functionality.

The Critical Communications Enhancement Program (CCEP) aims to increase the PSN’s land coverage to 85% of the state and 98% of the population. The Inquiry says that it firmly “supports expanding PSN as a priority” and “endorses the continued funding and completion of the CCEP as an immediate priority to enable an effective operational response by ESOs and, pending development and implementation of Public Safety Mobile Broadband, a more sophisticated mission-critical data transfer and communications system that will promote interoperability for NSW agencies and across borders”.

The benefits that would come from having a national public safety mobile broadband (PSMB) capability are well known. The Inquiry notes that achieving an “interoperable PSMB capability will support cross-border cooperation between public safety agencies during large-scale cross-border disaster and bring Australia in line with international jurisdictions such as the US and UK, which already have this capability”.

A PSMB National Project Management Office (NPMO), hosted by NSW and responsible for delivering work streams under the national PSMB Strategic Roadmap, “is in transition to centralised coordination under the Commonwealth”, the report says.

“The Inquiry understands that funding arrangements for the NPMO and the proof of concept are not resolved between the jurisdictions, and that this is required for the national PSMB program to proceed.”

The Inquiry also notes that the Commonwealth “has set aside 5 + 5 MHZ of spectrum for PSMB and offered this allocation to states and territories at below market value. However, NSW agencies advised the Inquiry that this allocation is only sufficient for business-as-usual public safety activities and would require heavy reliance on supplementation from commercial spectrum.”

“NSW agencies support provision of 10 + 10 MHz of dedicated spectrum to reduce reliance on carrier spectrum and allow for streaming of real-time data from multiple, concurrent sources,” the report states.

“In addition, given that the PSMB is solely for communications that support community protection and safety, the dedicated spectrum should be provided at no cost to states and territories,” the report adds.

Thus, the recommendation is that “in order to ensure emergency response agencies can communicate across state and territory borders, the Commonwealth Government [should] allocate 10 + 10 MHz as a dedicated spectrum for Public Safety Mobile Broadband (PSMB) at no cost to states and territories”.

Regarding interoperability between different states and territories, the Inquiry noted that while there are MoUs are in place, “there are differing levels of compatibility between fire agencies”.

For instance, ACT RFS vehicles have the NSW RFS code plugs that enable all NSW channels to be available to ACT RFS appliances, but Queensland and NSW operate different radio communication systems that are not directly compatible.

Therefore, Recommendation 58 says that “in order to ensure all agencies have a clear understanding of cross-border communication channels during bush fires, all MoUs between state or territory agencies [should] include an agreed protocol about how agencies will communicate across borders and that these are reflected in Incident Action Plans”.

Recommendation 59 in the report advises that “in order to improve response times to Triple Zero calls, the NSW RFS implements the integrated dispatch system before the 2020-21 fire season commences”.

This is followed by Recommendation 61, which states that “in order to improve cross-agency communication and coordination during bush fires, the NSW RFS [should] review Fire Control Centres (FCCs) in areas that were heavily affected by fire. The results should be combined with the Emergency Operations Centre (EOC) Facilities Review to identify areas that would benefit from a purpose-built FCC, enabling co-location with the EOC.”

Recommendation 30 covers minimising outages and extending coverage during bush fires, and says that the NSW Government should “work directly, or together with other Australian governments and/or their relevant power and telecommunications regulatory, policy and market bodies” to:

This is reinforced by Recommendation 54, which says that mobile generators should be “sourced and distributed on a priority basis during natural disasters, [and that] the EUSFAC [Energy and Utility Services Functional Area Coordinator] work with the NSW Telco Authority, relevant NSW government agencies and commercial stakeholders to develop a mobile asset deployment strategy. The strategy should reduce duplication in purchasing, maintaining and housing mobile generators and improve agility in deployment.”

The report also recommends that the NSW RFS accelerates the rollout of Mobile Data Terminals into all fire fighting vehicles to improve delivery of briefings and incident information/intelligence.

It also recommends that “finalisation of the Australian Warning System [should] be prioritised to provide greater consistency in public information and warnings” and that “in order to provide real-time information on evacuation doorknocking during emergency events, Government [should] explore a shared data gateway for NSW agencies based on the NSW State Emergency Service Collector app and a common mapping and analytics platform”.

This is just a brief overview of the report’s recommendations. You can read the full report at https://www.dpc.nsw.gov.au/publications/categories/nsw-bushfire-inquiry/.