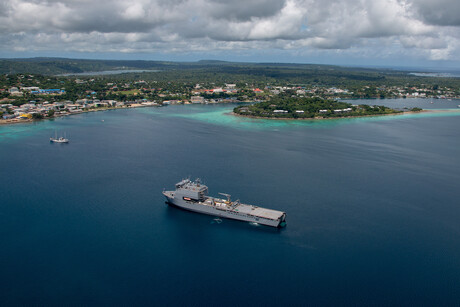 Vanuatu’s national government will get an upgraded emergency radio network under a joint project with Australia.

The governments of the Republic of Vanuatu and Australia are joining forces to repair and upgrade the Vanuatu government’s inter-island emergency radio network.

The three-year project will be undertaken under the auspices of the Vanuatu-Australia Defence Cooperation Program and will substantially boost the archipelago’s disaster preparedness and response capability. It will also support the Vanuatu Police Force.

Australian Minister for Defence Senator Linda Reynolds said Tropical Cyclone Harold, as well as the challenges of COVID-19, have highlighted the need for communications to support policing and disaster resilience.

“Australia is proud to partner with the Vanuatu Police Force to design and deliver an enduring solution that meets Vanuatu’s needs,” Minister Reynolds said.

“The project provides an invaluable avenue for enhanced collaboration, training and interoperability between our nations — including during humanitarian assistance and disaster relief operations.”

The project will establish a unified emergency call and dispatch system to connect police outposts to support local communities.

Initially focusing on delivering communications infrastructure and training to Port Vila, Luganville, Aneityum, Sola, Loh, Ambae and Epi, the effort will be expanded over the next three years to support 15 police outposts in total, including mobile two-way radio in five locations.

Vanuatu’s Deputy Prime Minister and Minister of Internal Affairs, Alatoi Ishmael Kalsakau, said the project will have a far-reaching impact.

“We know that good communication in the minutes and hours following a disaster is critical to an effective and speedy response,” Minister Kalsakau added.

“This is yet another example of how Vanuatu and Australia can work together as security partners to deliver practical benefits for both nations.”

Pictured: Port Vila will be one of the first centres in Vanuatu to benefit from an upgraded emergency radio network. Defence image by PO David Vowell © Commonwealth of Australia 2020