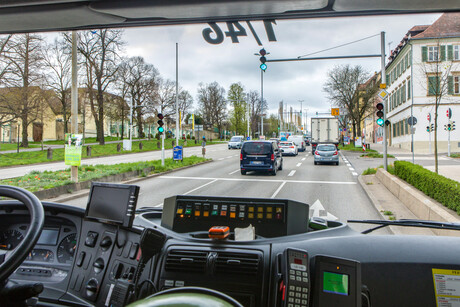 Vehicle-to-everything (V2X) radio technology developed by Australian company Cohda Wireless has been deployed by the German city of Ludwigsburg to enable fire trucks and rescue service teams to get to accidents and emergencies faster.

In a project led by traffic technology group SWARCO, 114 traffic lights at intersections in Ludwigsburg (located just north of Stuttgart and with a population of 85,000) have been fitted with Cohda MK5 Road-Side Units, which work with the equivalent MK5 On-Board Units in fire trucks and rescue vehicles, to grant them green traffic light passage on their way to emergencies.

The rollout follows a successful pilot project in early 2019.

Cohda’s technology enables the traffic lights to exchange information directly with approaching vehicles using standardised dedicated short-range communications radio. The traffic lights’ ACTROS control units have been equipped with the necessary programming to automatically prioritise the emergency vehicles as they pass through.

The system works by sending messages relaying position and speed, several times per second, from emergency vehicles to a traffic light controller. There, the signals are processed and compared with the scenarios stored in the programming. If the system detects an approaching emergency vehicle, the programmed signal sequence is started and the traffic light controller switches to the prioritisation program.

Once the vehicles have passed the intersection, the traffic light controller switches back to normal as quickly as possible to minimise impact on road traffic and traffic disturbance.

“V2X technology improves safety on our roads and is usually applied to help reduce injury and death. This initiative demonstrates the versatility of the technology,” said Cohda Wireless’s CEO, Paul Gray.

“In this instance, it is being applied to support emergency services in responding to incidents and accidents that have already happened, thereby also saving lives.

“Ludwigsburg is setting an example that cities around the world can follow,” Gray added.

Ludwigsburg’s Mayor, Matthias Knecht, said the fire department prioritisation in his city is the first full practical application of V2X in Germany. He said Ludwigsburg is a showcase city that is already relying on innovative cooperative intelligent transport systems technologies and intelligent traffic lights, thus preparing for its future as a smart city.

“A primary goal of our mobility concept is to optimise the traffic flow. To achieve this, we also rely on intelligent traffic light systems,” Knecht said.

“SWARCO’s technology for prioritising emergency vehicles of the fire brigade is an excellent example for this — because in an emergency every second counts, of course. Together with the city of Ludwigsburg, SWARCO has developed this innovative technology and brought it to the streets,” he added.

Cohda Wireless’s technology has been applied in similar ways in other countries. In Estonia and Finland, Cohda’s V2X hardware and software features in a smart pedestrian crossing solution that alerts pedestrians and other road-users to danger. And in Norway, Cohda’s V2X-Locate vehicle positioning system contributed to a successful location-finding technology trial carried out in the 2.2-kilometre-long Bjørnegård tunnel in Bærum.

According to Cohda Wireless, its software products are being used in more than 60% of all V2X field trials in the world today, working in compliance with US Federal Communications Commission, European Telecommunications Standards Institute and Chinese standards.